As has become a bit of a tradition over the last couple years, it’s the time of year when we look back on what we’ve done in the last twelve months at MetaBroadcast. Breaking a little from said tradition, I’m not going to start with a round-up of what we’ve been up to in the world of Voila. Instead, since 2014 has seen the birth of Team MetaBroadcast, I’m going to begin with another subject close to my heart: cycling. Ok, not really a team, but a few fellow-minded ‘cats, past and present, who enjoy exploring the open roads on two wheels.

Zach joining in April was enough to kick-start the cyclists amongst us to doing more of it, together. As Zach, Fred and I all had places in the RideLondon, it started quite reasonably as a training ride or two. This presented some unique challenges in itself, with all on-call engineers being out on the road, at the same time, together. Some hardware and software improvements—a portable keyboard and switching to OpenVPN—saw us well-equipped for any eventuality needing our attention when on the road.

They say a picture says a thousand words. Here are three pictures: 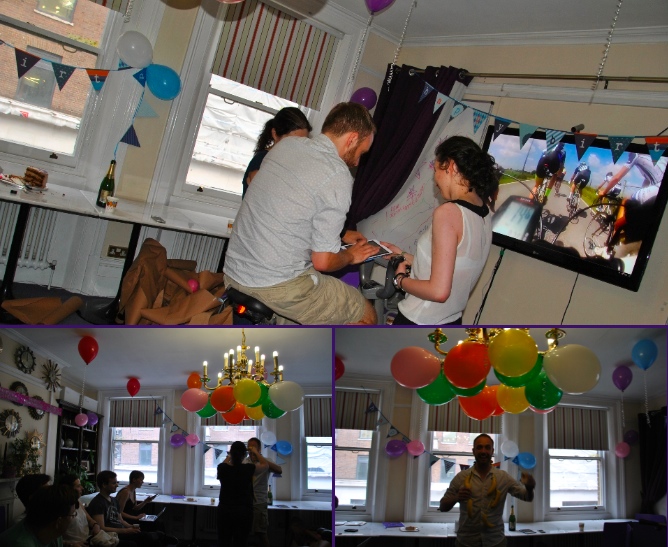 Yes, for my metaversary we had a turbo training competition. On a Boris Bike. And, no, I don’t recommend trying it at home.

With the tail end of Hurricane Bertha hitting the UK, it was touch and go as to whether RideLondon would happen at all this year. It did, albeit with a slightly truncated route that avoided all but one of the hills. Torrential rain throughout, my highlight has to be the fountains erupting from overflowing manhole covers causing rather unexpected obstacles in the road. Still, all three of us finished which, given the conditions, was no mean feat.

So far, so reasonable. I should’ve predicted what happened next, though, since it was Zach who’d once asked if we fancied doing the Dunwich Dynamo ride: an overnight ride from London to Suffolk. Thankfully Unfortunately I was busy that weekend so politely declined. However, more talk of mad rides ensued, and one Tuesday morning—clearly having left my senses in bed—I failed to respond “no” to the question “fancy riding to Bristol this weekend?” from Zach. That weekend saw me, Zach and Dan make the 135-mile (not round)trip to Bristol, taking in the wonderful sights across the south of England as we went.

Flights already paid for by the time of the Bristol ride, it was too late to pull out from the inaugural Team MetaBroadcast cycling holiday to Nice in October. Four days of cycling around the beautiful south coast of France in glorious sunshine were had, if we forget that one incident of nearly freezing to death at the top of a mountain (ok, so the French call them hills) when we got caught in a thunderstorm.

A day in the hills: two cols & a thunderstorm. Tabloid down the jersey for descent. @shinyhappydan @fredvdd @tfm pic.twitter.com/bpiOcwAfDd

As the days shortened and rainy November set in, things started to naturally peter out. For this year. There’s already talk of trips next year and, who knows, one day there could even be a Team MB jersey order placed. If you fancy joining us on one of our weekend rides, then do drop me a line.

the importance of disconnecting
5 Aug 2015

the pursuit of metappiness: and then there were purple stars
17 Sep 2012
blog comments powered by Disqus